On April 16, 2013, Sub-Zero and Wolf announced the winners of their Kitchen Design Contest. The nearly 2 year contest period extended between January 1, 2010 and October 31, 2012, and required each design to include one full-size Sub-Zero built-in or integrated refrigerator and one Wolf cooking appliance. Participants had a wide variety of high-end appliances to choose from including ranges, rangetops, ovens, cooktops, and a full-line of refrigeration products. Design evaluation was based on superior use of space, beautiful kitchen design, and integration of Sub-Zero and Wolf products.

Seven of the industry’s leading professionals judged more than 1,600 entries. The judges narrowed the submissions down to the top 54 entries that best integrated the Sub-Zero and Wolf appliances into the kitchen’s design. “These 54 regional winners truly represent achievement in kitchen design, and we celebrate their talent and work,” said Michele Bedard, vice president of marketing for Sub-Zero and Wolf.

The grand prize winners will be announced during the Kitchen Design Contest gala on May 21-22, 2013, in Madison, Wis., at the corporate headquarters. The Designer’s Choice winner will be chosen by members of the design trade via Facebook’s online voting system. The People’s Choice award will be chosen via the same platform, but voting is open to the public. “Our new People’s Choice award will expand the influence of the Kitchen Design Contest, and we hope friends and family of regional winners — as well as anyone who appreciates fine kitchen design — will participate in the online voting,” said Bedard. “We look forward to announcing the winning designers as chosen by the public and the design community and awarding them each a $15,000 cash prize.”

Where to Watch Fourth of July Fireworks in Boise 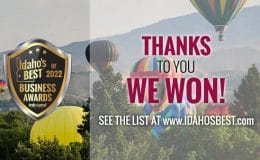